The Passing of the Honorable Robert I. “RIC” Cusick, former Director of the U.S. Office of Government Ethics 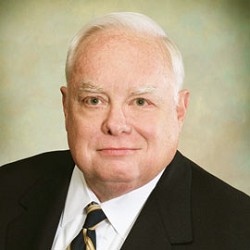 It is with sincere sadness that the U.S. Office of Government Ethics shares with the ethics community news of the passing of its former Director, the Honorable Robert I. Cusick. Director Cusick was nominated by President Bush in February 2006 and confirmed by the Senate in May 2006. During his five-year term leading OGE, Mr. Cusick significantly contributed to the ethics community and helped raise the level of discourse about government ethics.

In his introductory comments at the 16th National Government Ethics Conference, Director Cusick reminded participants that, "High public office should never be thought of as an occasion for self-congratulation or personal nest-feathering. It is service to the public. It is an honor, yes, but only so long as the service is ethical and honorable." OGE's current Director, Walter M. Shaub, Jr., recalls that, "RIC Cusick was a strong advocate for the principle that public service is a public trust, a core principle to which OGE remains committed. He was an ardent believer in the non-partisan values underlying the government ethics program. I admired him for that and considered him a friend. I know that all of us at OGE who had the privilege of working closely with him are going to miss him."

Prior to serving as Director of OGE, Director Cusick received his Bachelor's degree from the University of Louisville in 1965 and his Juris Doctorate from that University's Brandeis School of Law in 1968. He began his legal career as an officer in the Navy Judge Advocate General's Corps, working first in the headquarters office of the Judge Advocate General and later at sea as the Legal Officer of the attack aircraft carrier, USS AMERICA (CVA-66). He returned to Louisville, Kentucky, his home, in 1972, but remained affiliated with the Naval Reserve and retired as a Captain in 1998, after serving in the District of Columbia, Annapolis, and Iceland.

Director Cusick's legal career as a civilian was with Wyatt, Tarrant & Combs, LLP, a large multi-state firm, for over 33 years. He retired as a partner of the firm upon confirmation by the Senate. His practice concentrated in ethics, mining litigation, and corporate criminal law, and he became recognized for his work in both ethics law and underground mine explosions. He was Partner-in-Charge of Ethics Counseling for the law firm for many years and was active in both legal and public officer ethics in Kentucky. He was the chairman of the Jefferson County (Louisville) Ethics Commission and of bar association groups which drafted ethics regulations. He received the Distinguished Service Award from the Kentucky Bar Association and the Outstanding Alumnus Award from the Brandeis School of Law. He was a member of the Kentucky Bar Association Board of Governors and the Kentucky Board of Bar Examiners.

OGE mourns Director Cusick's passing and wishes to express heartfelt condolences to his family and friends.