I am pleased to announce that the U.S. Office of Government Ethics has a new General Counsel. This morning, I administered the oath of office to David J. Apol. Mr. Apol has been a key player in the federal ethics community for some time, and it is fitting that he returns to OGE to assist us in our mission of ensuring that the public can have confidence in the government’s impartiality. Mr. Apol has time and again proven himself to be a gifted legal professional with a deep understanding of the federal ethics rules and an appreciation for the core principles underlying them. 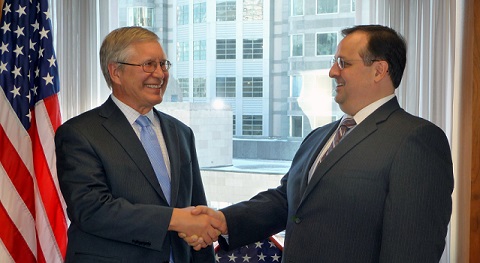 Mr. Apol’s career has prepared him well for this position. For the past decade, he served as the Chief Counsel for Administrative Law at the Office of the U.S. Trade Representative, leading the administrative law program of a cabinet-level agency. Before that, he served as an Associate General Counsel at OGE, where his accomplishments included both working on ethics law reform in the United States and advising a foreign government on establishing its own ethics laws at a critical time of political change. Prior to coming to OGE, Mr. Apol served as Associate Counsel to the President, advising the President, the First Lady, and senior White House officials on ethics issues and the Presidential nominee financial disclosure program. In that capacity, he had the opportunity to work personally with ethics officials from almost every executive branch agency. He understands the front-line experience of these ethics officials because he has been one of them. Mr. Apol served as an executive branch agency ethics official at the Department of Labor from 1992 to 2000, where he was charged with establishing and then managing a new Department-wide ethics program. Previously, he served as a Counsel for the Senate Ethics Committee from 1987 to 1992 – an eventful time in legislative branch ethics. Prior to coming to Washington, Mr. Apol served as a Judge Advocate General Officer in the U.S. Army where he was responsible for ethics, administrative law, international law and contract law. He is a graduate of both Wheaton College and the University of Michigan Law School.

Mr. Apol’s proven leadership, dedication to helping government employees serve the public trust, and extensive knowledge of the federal ethics laws and regulations make him the ideal person for this important job. I am confident that the addition of Mr. Apol to OGE’s leadership team will strengthen OGE’s legal and policymaking capacity.